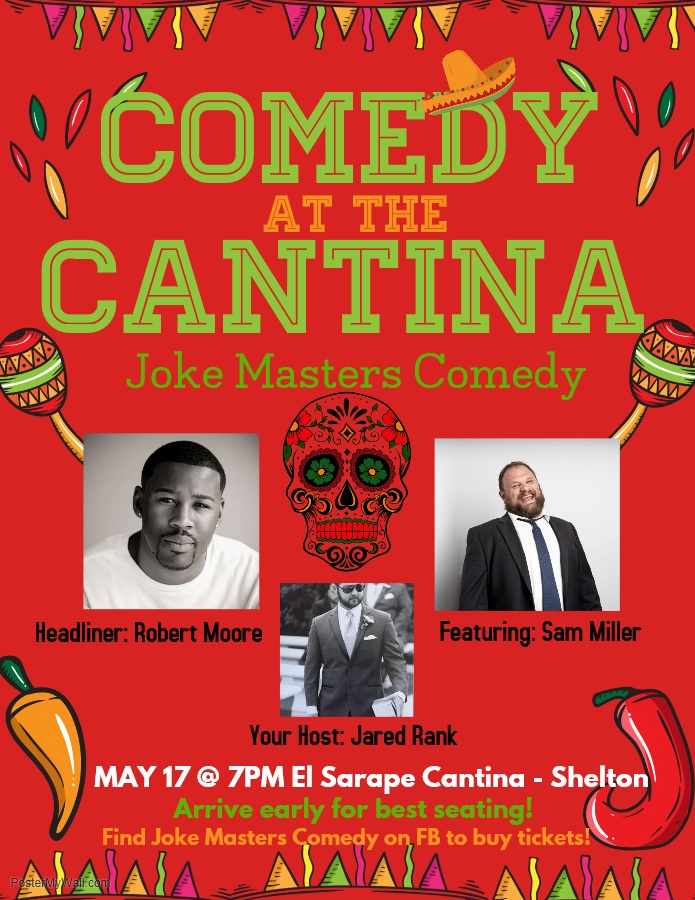 Join us at El Sarape Cantina for an evening of laughter! Joke Masters has a premier comedic lineup coming for you for your perfect night out. El Sarape has amazing drink offerings as well as a delicious menu of foods to delight you!

The show begins at 7PM but please arrive as early as 6PM for optimum seating as well as time to order your food/ drinks!

Headliner Robert Moore: He was born and raised in Dallas, TX. After relocating to Washington State, Robert began performing stand-up comedy in May of 2013. He won The Crowd's Choice Comedy Competition in May 2016 and has been featured in The 2018 NW Black Comedy Festival. He has performed comedy in venues all over the US and Canada and has opened performed with the likes of Faizon Love, AJ Johnson, Kelsey Cook, Jubal Fresh, Nate Jackson, and Mike Bonner. Robert thrives on his ability to be unscripted. His energetic delivery and full bodied humor will keep you wanting to see what he'll do next. He loves to engage the audience and he performs with passion and enthusiasm. CA$H!

Featuring Sam Miller: Sam Miller grew up in Rural Pierce County and moved to Olympia  at the age of 14. He has lived in Olympia off and on since that time. In his 36 years on earth He has been a farm hand, a ranch hand, an inmate, a wildland  firefighter, a dishwasher, a warehouse worker, assistant preschool teacher, a chemical dependency counselor and a bouncer. He has lived with Alcoholism and Methamphetamine addiction since his early teens. He is now in recovery going on 10 years and is currently a husband, father, student, Outreach Worker and comedian. He's performed all over the west coast at Comedy Clubs and Casinos. He won the Comedy On Trial Competition in Seattle in 2016 and competed in The Seattle International Comedy Competition in 2017. He’s also performed with the Addicts Comedy Tour and at AA and NA conventions around the northwest.For 3 consecutive years he has won awards in "The Best of Olympia" issue of the Weekly Volcano. In 2016 Best Local Hero, 2017 Best Local Celebrity, 2018 Best Comic Relief. He has opened for Chris D'elia and Laurie Kilmartin.

Host: Jared Rank - was born on the lobby floor of Harrison Hospital in Bremerton Washington so you know he’s white trash. He’s only been doing comedy for 6 months but he’s fast out the gate. He qualified for the Cookies Comedy competition, and Hi Fidelity competition his first week doing stand-up.  You can find him at comedy nights, and open mics around the state. The hilarious, the always angry, ferociously funny.

The event runs from 7:00pm to 8:30pm on the following dates.
Select a date to add this event to your calendar app.